Vyara Pipeva on Proshek ‘The brothers in love with Bulgaria’

Today, 11th of May in the people’s community center “Slavyanska beseda”, in Sofia (127 Rakovski str.) at 6:30 PM, entrance free, the documentary by Anastas Dzhidrov “The Brothers In Love With Bulgaria” will be presented. This is a reason to have a chat with Vyara Pipeva about the Proshek kin, about what they have done for Bulgaria and what we have done for them…

– Last year it was the 105th anniversary from their death. A century is not a short time. Their contemporaries are not among the living, and the following generations are aware of the past only if they have where to hear from. Unfortunately in the history books during the totalitarian regime nothing was written about them.

– Actually, the Proshek brothers are kind of an illustration of the free Bulgaria, when everyone could have become anything. They are born in an extremely poor family in the town of Beroun and manage to prosper…

– Georgi Proshek is the elder brother, who first comes in Bulgaria even before the Liberation. At that time in our country there were living many other Czechs. Among them are Konstantin Jireček, Besenshek, and Mrkvička. A Czech society has been founded. Bulgaria is a wonderful country, which both brothers have already fallen in love with and accepted as a second motherland. And when a person lives and works with desire and passion, has the needed qualities and expertise, prospers.

– Actually, there is no systematic biography of the Prosheks, although the situation is the same with most of the prominent Bulgarian politicians, entrepreneurs and participants in cultural events.

– Yes, that is true. I have used information from various sources. I was surprised when the camera crew delivered the screenplay for the film about the Proshek brothers with systematic information in relation to them. Recently I met with assoc. prof. Georgetta Tcholakova, chief editor of the journal “Slavyanic Dialogues”. She shared with me that today – 11th of May 2011 /Wednesday/, the so-called Czech issue of the journal will be presented at the George Papazov gallery in Plovdiv at 6:30 PM. I have her word that time will be spent on forgotten Czech people, who have contributed to the development of Bulgaria. Such names are for example Františka Shourekowa, Wladimir Siss and others. I hope that such things happen more frequently.

– I admit, that I no longer remember all the books I read in my life in which there was something about the Proshek brothers. Now I feel pity for not having systematized it, even though slowly in mi mind a specific kin story about the Prosheks has been formed as a terrific novel…

– That sounds intriguing! A couple of weeks ago the idea about the creation of a motion picture was shared with me, co-production with the Czech television. However, a book is a book. Especially a history one remains contemporary forever.

– Listen, somewhere I have read that Irzhi Proshek in a way has participated in the April uprising, that he has prevented Ottoman soldiers to pass through the railway to the uprising parts of the country. It appears to me that Irzhi Proshek has sent letters in the Czech country about the development of the liberating for us Bulgarians Russian-Ottoman war… All of these honorable deeds, which are not systematized, described, why not even filmed – dreams…

– Yes, you are right about that. Georgi /Irzhi/ Proshek participates in the building of the Baron Hirsch’s railway, which connects Odrin with Belovo. He goes to live in the village of Yabalkovo, district Dimitrovgrad, and has an active participation in the organization of a Slavyanic house. The official activity was educational. The unofficial, the illegal, was the revolutionary, the liberation of Bulgaria. in the Slavyanic house, called later Proshek’s school, Georgi Proshek has met secretly with Vassil Levski, with whom they were close friends. When the Deacon was arrested, Georgi Proshek was thinking of a plan for his liberation, but it fell apart as in the last moment it was decided that Levski will be hanged in Bulgaria. The director Anastas Dzhidrov reflects all these not widely known historic moments in the documentary “The brothers in love with Bulgaria”.

– Irzhi Proshek was a stenographer in the Bulgarian Parliament, in the dawn of our parliamentary life. It is curious whether Irzhi Proshek has, for example, left any memories about this part of his life, when in front of his eyes were these people, whom Simeon Radev calls “the builders of modern Bulgaria”. What is the situation of the Proshek’s kin memory? Has anyone of the members of the family ever tried to describe it, to tell about it?

– Wera Proshek – Dworakowa, granddaughter to Bogdan Proshek, has told the kin history to us. She is daughter to the only son in the family. As Bogdan had 5 daughters, he ardently prayed to God to bless him with an heir. For fulfilling this purpose he and his wife travelled to the Holy Sepulcher and promised to him that if the miracle happens, he would build a catholic church as a sign of his gratitude. Soon when they got back Bogdan Jr was born, the father of Wera. Bogdan Proshek fulfilled his promise and built the catholic church “St Francis” on “Assen Zlatarov” str. in Sofia.

– There is a fact, which is of utmost importance to us, Bulgarians, at least in my opinion – Irzhi changes his name to Georgi, and Theodor – to Bogdan. I am not aware of another case like this in the Bulgarian history – foreigners to accept Bulgarian names. Alas, what happens usually is the exact opposite..

– I haven’t thought on this fact, but it is undoubtedly fascinating.

– In Sofia we are surrounded by what was made by the Proshek kin. So, Georgi (I point out Georgi, the former Irzhi) Proshek participates in the creation of the first architectural plan of Sofia (made by the Czech Lubor Bayer), and for that reason the brothers call their cousin. He – Joseph Proshek, later assists Friedrich Grunager (another undeservedly forgotten person) in the building of the Parliament. Georgi, Joseph and Bogdan Proshek are the builders of two of Sofia’s symbols – Orlov and Lavov bridges. Waclaw Proshek participates in the building of the Central station, built in accordance with the project by Adolph Kolar… We are surrounded by the creations of Proshek, here in Sofia, but Proshek are complete strangers to the modern Bulgarians…

– Unfortunately that is the sad truth. Here I will add that another of their deeds is the project for the Varna port.

– Proshek have created also the famous beer pub “Dalbok Zimnik” (again I’ll ask – why don’t we have pub history?), situated near the beer factory. A whole novel could be written about what has happened in “Dalbok Zimnik”…

– Who of the modern citizens of Sofia knows the peculiar, the paramount, I would say, importance of Orlov Bridge, on which Proshek put the metal railing and the eagles (made in Vienna, by the way). These are memorial signs for the Bulgarian exiles in Diarbekir, at this very place the survivors have been welcomed when they came back home… Another example of crucial lack of memory…

– I deeply desire for a memorial plaque to be put on the Orlov Bridge. This is the place for mentioning that during December 2010, the Capital Municipal Council took unanimous decision that the square in front of the Bulgarian National Television to be called Proshek Brothers, and that a street in the Ovcha Kupel district shall bear their name as well.

– What happened with the Proshek kin during the years?

– In 1905 Georgi Proshek dies. 1 month later by grief dies his younger brother, Bogdan. They are buried one next to another in the Central Catholic Cemetery in Sofia. After 1944 the heirs to the Proshek kin are deported, while the grandson to Bogdan Proshek, Bogdan Pipev is sent to a camp in Bobov Dol. All of their property becomes nationalized.

– I will propose an idea, I beg your pardon if it sounds unmannered. Please appoint biographer of the kin Proshek, provide him with the family archives, let him meet all representatives of the kin and hear their stories… Maybe this is the way for the memory of the Proshek kin to be preserved alive?

– I should thank you – that is a worthy idea. I had the pleasure of meeting the journalist Elena Dimitrova. She possesses extremely valuable documental archives of interviews with family members ever since 1987.

– Sometimes I dream of monumental history of the Bulgarian families, but I am aware that such type of projects today is absolutely impossible, because the past is forbidden. Have you noticed that the Marxism and the Liberalism have the same attitude towards the past?

– Knowing the history is very important for the generations. And what will be their attitude towards it is subject to their own free choice.

– I imagine how in the future there is a monument in Sofia commemorating the Proshek brothers. Of course, this will happen when Bulgaria is revived… Or you disagree?

– A memorial plaque of the Proshek brothers will be put. A competition for best project is going to be held.

– Which country are the living representatives of the Proshek kin situated in?

– They are now scattered around the globe – Australia, Canada, Austria, Germany, Czech Republic and a small part in Bulgaria.

– What do you dislike about BOOKS NEWS?

– I wanted to miss the “dis” part of your question. But since you are asking, I will answer. I dislike that the edition is electronic only and the coziness of reading paper is lost. I personally love to underline with pencil the interesting parts while I read. I agree that with the computer programs I can underline as well, but for me it is not the same.

In the picture: Vyara Pipeva 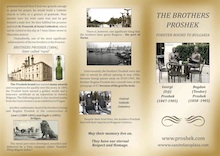 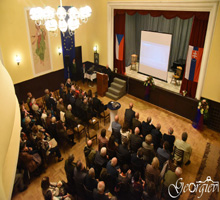 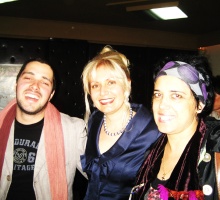