Jiří Prošek was a remarkable person, builder, economic and cultural activist, public man, who chose Bulgaria for his second home and the destiny of Bulgarian people for his own.

He was born on December 25, 1847 in Beroun – a city near Prague which lies at the Berounka River. His father – Jiří-František Prošek, was a famous shoemaker and his mother – Maria Bartakova, was good piano player. They had three children – Maria, Jiří and Bohdan. Their family was known in Beroun for more than 300 years.

Jiří Prošek attended the local primary school and graduated with honors in 1858-1859. After that he attended a college in Prague where he studied till 1864-1865. As soon as he graduated he transferred to Polytechnic Institute in Prague where studied engineering and construction. In 1869, after four years of studying, he took all his exams and graduated with a Bachelor degree in engineering. His student years were not easy because when he finished the first year of the university, his father died. He had to work and study at the same time. Because of his hard studding Jiří Prošek mastered a couple of languages: German, English, Italian and Russian. During his studding in high school and university in Prague, Prošek met a lot of Bulgarian young people who also were studding there. He became closer friend with them but especially with Ivan Drasov – one of the closest friends of the revolutionary poet Hristo Botev. Later he became friend also with Peter Iv. Berkovski. He was Bulgarian revolutionary and taught Prošek to Bulgarian language. Therefore the young linguist Prošek could speak not only several Western languages but he became familiar with Slavic languages, too. Peter Berkovski and the famous Bulgarian combatant – Stoyan Zaimov were teachers in a school in Haskovo.

In his book “The Past” Stoyan Zaimov described with admiration the warmth of Prošek, his generosity, his respect for the Bulgarian traditions and holidays, festivities, songs, people and ice skating on Maritsa River.

In 1869, after his graduation, Jiří Prošek arrived in Bulgaria. At the beginning the young engineer practiced his profession in Constantinople (Istanbul). There he was employed in The Central Bureau in the company of baron Maurice von Hirsch – a rich German industrialist, as an assistant engineer of designing and construction of the railway Odrin-Saranbey. He worked there from August 26, 1869 to March 31, 1870. 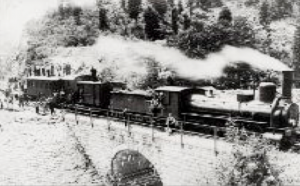 Prošek settled down in Almanii village (today Yabalkovo village, Haskovo) together with other Czech and Poland engineers. After he became closer with the leaders of the secret regional revolutionary committee together they set up “Slavic House” which was a school and a library. Prošek like the Bulgarian patriots also desired the liberation of Bulgarian people. But he also insisted on Bulgarian cultural development. Because of his help the school in Almanii village changed his management and started to function as Czech schools. He managed to accomplish his plans and the glory of the school spread in whole Trakia region. This was the official activity of “Slavic House”. Unofficially, under the guise of educational activities, Prošek set up the first international secret revolutionary committee.

An important role in Prošek life played his meeting with the Apostle of Freedom Vasil Levski.

Together they discovered new possibilities for the national liberation struggles of the Bulgarian people. Prošek imported weapons on the pretext of guarding the railway and secretly delivered the revolutionary post to the committees.

In 1876 Prošek quitted his job in Baron Maurice von Hirsch Company and began working as a correspondent in European newspapers. In this way he managed to inform other European countries about the events in Bulgaria, especially after brutally suppression of the April and Starozagorsko Uprisings. During the Russo-Turkish War Prošek was very active in helping Bulgarian people. One of his friends in Tsarigrad, Dr. Nadherny (Hekim Pasha) – head of the health service in the Turkish Army in Istanbul revealed him the Ottomans plan to reinforce the army around Mount Shipka with siege artillery.  Prošek and his devoted friends left for Odrin where they made the so-called “crazy development” – risking his own live, he dismantled around 200 m railway lines, threw them into the river Maritsa and the Ottoman army was late with around 30 hours. These actions had a significant influence on the outcome of the battle. The Ottoman authorities captured Jiří Prošek and he was sentenced to death by the Sultan. Disguised as a peasant, he managed to escape in Bucharest, where he worked as a Russian translator.

For his sacrifice and contribution to liberate Bulgaria from Ottoman rule, he was awarded with order of merit “Sv. Aleksandar Nevski” I st. and golden sword which was personally handed by Mihail Skobelev on behalf of the impertor Aleksandar II.

After the liberation Jiří Prošek settled down in Sofia. He is the first stenographer of The National Assembly. He is the founder and a member of “Slavyanska beseda – 1880” and “Czech” organization. For some time he managed the journal “Czech falcon”. He was a co-founder of the hunting organization “Falcon” (Bulgarian: “Соколъ”) and the Bulgarian Engineering and Architectural Organization. It was his decision for building the monument of Vasil Levski.

We have to mention that his personal life is also connected with Bulgaria. In 1878 in Sofia he married his fiancée Anna Roubalova, who graduated the musical school in Prague. She arrived in Bulgaria by ship on the Danube River. With a lot of baggage and her piano, she travelled to Sofia by buffalo cart. The couple had four daughters and a son – George.

In 1884 together with his brother Bohdan they built the most modern brewery at the time. Prošek made a research for marble deposits in the country and made a map of them. He initiated brick production in Dolni Bogrov village, Sofiysko and supplied materials for the brewery construction. This is the first building in Bulgaria with electricity and own generator. During the balls in the palace they used the electricity from the factory. The building of the palace was electrified later.

They also built the first printing house in Sofia where at the beginning were printed all newspapers, the magazine of literary society (today is BAN), The State Gazette, forms for the palace, ministries and all government agencies. On 10 January 1944 the building was destroyed by the bombings and later was rebuilt. Today on this place is located the National Gallery for Foreign Art.

Their property was the residence Agricola today known as the presidential residence which is located in Lozenets district.

Prošek brothers and their cousin the architect Václav Prošek are authors of the great piece of art – Lions’ Bridge (Bulgarian: “Лъвов мост”). 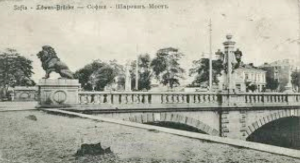 It was built in 1889 when Dimitar Petkov was the mayor of the city and Vatslav Kolar was the chief architect. The new bridge was built from stone over the Vladaya River at the place of an older bridge called “Motley Bridge” (Bulgarian: Шарен мост, Sharen Most ) because it was decorated with red and yellow stripes. It was 26 m long and 18, 1 m wide. The name of Lions’ Bridge comes from the four bronze sculptures of lions. All metal elements of the bridge were produced by the Austrian company “Waagner & Biro”. The entire construction of the bridge cost 260,000 golden leva, a huge amount of money for the time. In 1900 were installed the first electric lights.

The company Waagner & Biro was founded in 1854 by Rudolf Waagner in Vienna, Austria. Today the company has more than160 years of history and experience. Waagner-Biro AG is a corporation which owns companies in the sphere of metalworking and mechanical engineering in 14 places in Europe, Asia and the Middle East. British museum London, Reichstag Dome Berlin, Burj Khalifa Dubai, St. Stephen’s Cathedral Vienna and many others are modern products of this company.

The other emblematic work of Prošek brothers was the building of Eagles’ Bridge. The bridge was built in 1891, two years after Lions’ Bridge. The chef architect of Sofia was Adolf Kolar. Together with Václav Prošek who was cousin to Prošek brothers they designed and built the both bridges. Eagles’ Bridge was built over the Perlovska River as a symbol of liberty because at this place were greeted the prisoners of Diarbekir who rebelled against the slavery. All metal elements of the bridge were produced and delivered by Austrian company ‘Rudolph Philipp Waagner & Biro’ (1891). The monument of Vasil Levski, the City garden fence, Lion’s bridge and Prince’s Palace (today a National Gallery of Art) were also built with elements made by the Austrian company. 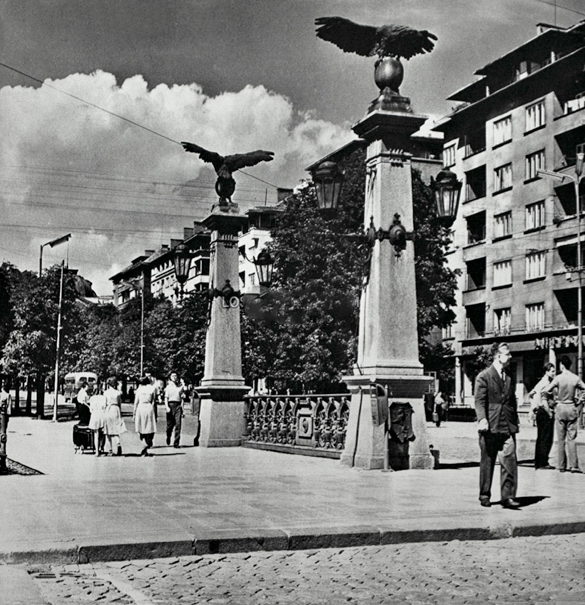 It was Prošek brothers’ idea for building the monument of the Apostle of Freedom Vasil Levski with whom they developed revolutionary activities for the liberation of Bulgaria. The monument is 13 m high, made of grey Balkan granite and designed by Czech architect Antonín Kolář or Adolf Václav Kolář (1841-1905) who worked in Bulgaria. His main aim was: “to clean and repair the muddy and almost impassable streets of Sofia”.

The monument of Vasil Levski –  Sketches of lanterns 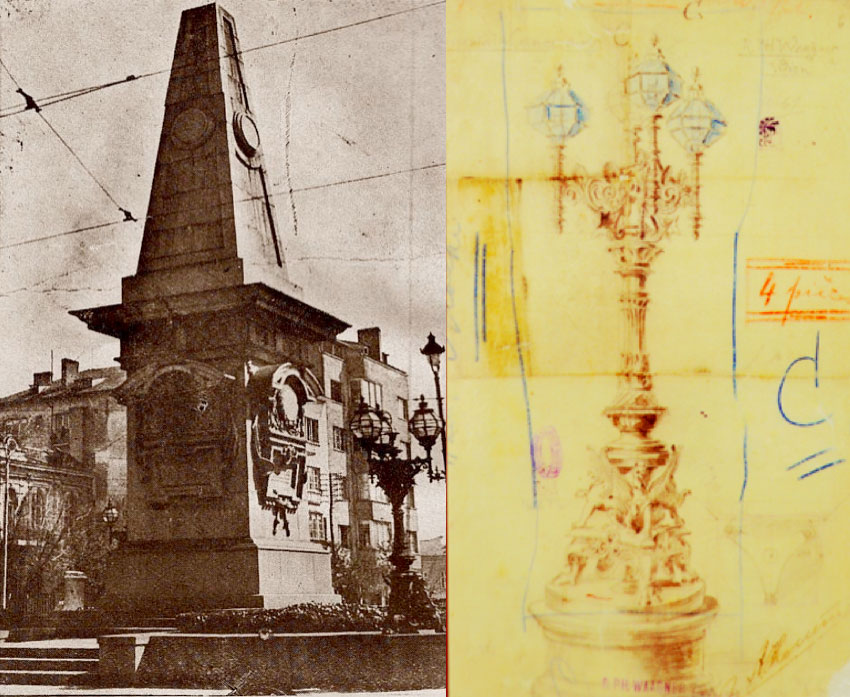 However, it is considered that the port of Varna was the biggest construction activity of Jiří Prošek. The port collapsed due to landslides. This was a hard shock for Jiří Prošek and he died of heart attack at age 58.

His dying wish was to be buried at the foot of the Vitosha Mountain and it was fulfilled.

Today he rests in the family tomb, plot № 16 of the Sofia Central Catholic Cemetery.

Just one month later his younger brother Bohdan died of grief for his brother, only at age 47. 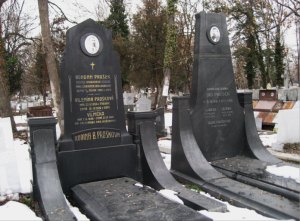 Although their lifetimes were short, Prošek brothers will leave in Bulgarian hearts forever.