A sculpture and а commemorative plaque of Proshek Brothers were inaugurated on 14 November 2017 at the same place where 133 years ago the Brewery of Proshek Brothers had been built. The sculpture was created on the occasion of the 170th anniversary of the birth of the older brother Georgi Proshek with a donation by San Stefano Property Development and at the instigation of the Civil Initiative Committee for placing a Proshek Brothers monument.

“It is an honour for us that this sculpture is created by Professor Georgi Chapkanov – the Master, Stanislava and Kosta Chapkanovi and Arch. Stanislav Konstantinov. With this sculpture we create a place of commemoration inspired by history and the duty to these remarkable people and to Sofia in the contemporary urban space” said M.Eng. Nikolay Karayanev, Executive Director of San Stefano Property Development.

HE Dušan Štrauch, The Ambassador of the Czech Republic to Bulgaria noted: “I am glad that even after so many years the names not only of the Proshek Brothers, a memory which we will revive today with the inauguration of the monument, but also of other prominent Czechs have not faded out of the Bulgarian nation’s mind and such monuments are being inaugurated”.

“There are many foreigners from various parts of the world among the builders of modern Bulgaria- stated the Deputy Mayor for education, culture, religion, youth and sports activities of the Municipality of Sofia, Todor Chobanov- undoubtedly the Proshek Brothers stand out among them”. 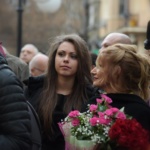 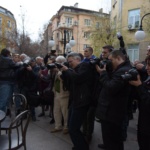 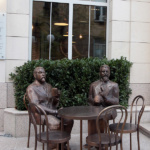 Georgi Chapkanov, who was extremely excited, thanked for the great attention, as he pointed out that it is not aimed at us, but at those exceptional people – the Proshek Brothers. “Incredibly noble, wise, pro-active and talented. They were indescribably good people who had done so much for our ill-fated country. The inauguration of the sculpture was followed by a documentary photo exhibition “Bulgarian Czechs” at the second floor of San Stefano Plaza, which is a project of BTA and the Archives State Agency. The President of the agency Assoc. prof. Mihail Gruev emphasized on the fact that “As a community we owe those who had participated and built modern Bulgaria and devoted all their enthusiasm, life and energy in modernizing Bulgaria, side by side with the Bulgarian revolutionaries. There is no doubt that the Proshek Brothers play a central part among them. The exposition, which contains resourceful photo and text materials in both Bulgarian and Czech, will be exhibited until the end of November.

On the occasion of the anniversary of the birth of Georgi Proshek his successors made a jubilee limited edition beer using an old Czech recipe.