The Legendary Brewery of the Prošek Brothers 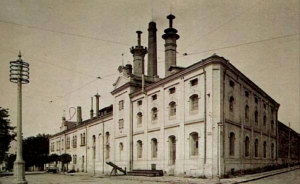 When in the distant 1884 the Prošek brothers built the Czech brewery called Prošek, the massive building for the standards back then stood alone on the hill.

Today, 120 years later, an elegant multifunctional building will take the place of the old beer factory, which is located opposite the Bulgarian National Television in Sofia.

A modern complex of luxury apartments, shops and offices will be constructed in the vacated area of ​​6.5 dca, located on the corner of San Stefano Street, Sheynovo Street and. Tulovo Street. The built up area of ​​the site is 55,000 sq. m., which also includes four-storey underground car parks. The architectural design envisages the main entrance, which will be on. San Stefano Street to feature an atrium with spectacular glazing, lighting and a water area. The emphasis of the project is to preserve the uniqueness of the brewery. Therefore, a two-storey retro pub will be opened in the central part of the property to remind of the former glory of the beer factory. 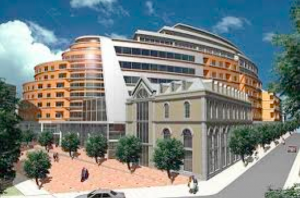 Few people know that besides the brewery, the Prošek brothers have also constructed Eagles’ Bridge and Lions’ Bridge, the Monument to Vasil Levski, the first railway station of Sofia, the first brick factory, they installed the first lift in Bulgaria, and they participated in the first Master Plan of the capital city.

The Prošek family is deeply connected with Bulgaria. Its history has recorded the brothers – Georgi / Jiri / and Bohdan / Theodore / and their cousins Václav ​​and Joseph They also participated in the construction of the National Assembly, Varna Port, they establish the society Slavyuanska Beseda – 1880 and the Bulgarian Civil Engineering Society.

They owned Agricola Residence, which is known today as the Lozenets Government Residence in the district of Sofia that bears the same name, as well as the first printing house in the capital city, which used to print all newspapers, the magazine of the Book Society (today the Bulgarian Academy of Science), State Gazette from its first issue, templates and forms for the palace, ministries and all government offices.

The first member of the Prošek family who arrived in Bulgaria was Jiri, who later adopted the Bulgarian name Georgi. In 1870, the 23-year-old started working as an engineer at the Railway Construction and Operation Company in the European part of Turkey of Baron Maurice Hirsch. During the Russo – Turkish War of Liberation he became a correspondent for Czech newspapers and reflected the course of military action. In 1878 his brother Theodore / Bohdan / arrived, who was born in 1858. They established their own printing house. In 1879, the first mayor of Sofia, Stoyko Salabashev, invited the Czech architectural technician Lubor Bayer, who prepared the first plan for the development of Sofia. His assistants were Georgi Prošek and Vaclav Raubal. To work on this plan the two of them invited Arch. Joseph Prošek – cousin.

On 3 January 1880, the Master Plan is completed and approved. It reinforced the current circular system of the boulevards V. Levski, P. Evtimiy, Hr. Botev, Slivnitsa and Volgograd. Joseph Prošek participated in the preparation of the Master Plan of Sofia, which is known under the name of Prošek Plan and after it was approved by the prince, it was called Battenberg Plan. The plan that was written down in history as the Battenberg Plan of Sofia had an American style – the capital was divided into squares, between which small streets went through and every plot had 5-6, up to ten 10 houses with yards. This way, for the first time Sofia obtained a European look.

While working on the plan, Georgi Prošek married Anna Raubal, the sister of the urban planner Vaclav Raubal and so Georgi remained in Bulgaria.

During those years, Bohdan Prošek occupied his time mainly with the printing house. Georgi and he built a home considered aristocratic for that time on 5, Moskovska Street. Soon after that, in 1895 they founded the family company Brothers Georgi and Bohdan Prošek, which registered growth throughout the entire period until the nationalisation in 1947. With time, the company flourished more and more. Its management multiplied. From his marriage with Wilhelmina. Bohdan Prošek had five daughters – Bozhena, Milka, Vlasta, two died as babies and a son called Bohdan. The children of Georgi and Anna are Maria, Ruzhena, Anna and a son called Georgi.

Prošek Printing House of the Court

The first great work of the company was the construction of the Prošek Beer Factory. It started in 1884. The construction was based entirely on the principle of entrepreneurship, with a preliminary contract – to be paid for at the end. Thus, the masters Neno Hristov and Georgi Nikolov undertook to make 100,000 bricks, receiving 16 Bulgarian silver leva for every 1,000 pieces of them. They concluded a separate agreement with Arso Mitrev for the excavation of a “cellar”, where the beer would mature. It was 7.7 m wide, 22.30 m long and had another 6 in terms of width. They concluded a contract with the same master for an ice compartment. The brothers believed that the good quality of the beer lies in its own ice production. The excavation works were priced and 1.20 Bulgarian leva per cubic metre. The factory was completed in 1885 and it became a supplier of beer for the royal court straight away. The brothers established their own pub as well, which was called “Deep Cellar“ and was located right next to the factory. This pub had 400 chairs and 50 tables.

In 1901, the brothers expanded the brewery business towards Chamkoriya. They rented a building, turned it into a locale and started to sell beer. Ten years later, this was not sufficient anymore and they rented a second building for a new locale. Alexander Balabanov had invested money in the construction of Chamkoriya Resort and the Prošek brothers wanted to rent his casino and sell their beer there.

They concluded an agreement, which was breached by Balabanov soon after that and they did not succeed to achieve to realize their intentions, losing 300 borrowed leva, which they had given to him beforehand.

Václav Prošek arrived in Sofia in 1886, invited by his cousins Georgi and Bohdan. He had obtained an architectural degree in Prague. In 1888, he participated in the construction of the Central Railway Station, designed by arch. Adolf Kolar. After that, he started work at the family company. Georgi, Joseph and Bohdan built Eagles’ Bridge and Lions’ Bridge. 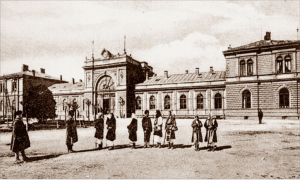 One of the main tasks of Stefan Stambolov’s government was to build and open the railway line Tsaribrod – Sofia, Sofia – Vakarel and Vakarel – Belovo. For that time, Sofia Railway Station was the most impressive not only in Bulgaria, but also on the Balkans. The station was built one kilometre from the entrance gate of the town, north of Lomsko Shose, according to the design of the architects Kolar, Prošek and Marinov. Italian specialists participated in its construction. The construction lasted from 1882 to 1888. The building was single-storey, 96 m long and 12 m wide, It had a second floor in its eastern and western parts and in the middle it had a modest high vestibule, fused with a clock tower, with a view towards Vitosha. All business offices were located in it, and three waiting rooms were available for passengers: for first class with red velvet sofas, for second class – with green ones, and for third class – with wooden benches. Gas lamps illuminated the station. A large bell was present next to the main door of the platform, under the platform clock, where a bell ringer was later installed, which the bell ringer used to announce: ticket sales with the first bell, passengers getting on the train and farewell with the second one and train departure with the third bell.

There was a beautiful bronze fountain in front of the railway station, around which the cabmen waited for their customers. Traffic was regulated with Morse telegraph apparatus “Leopold”. 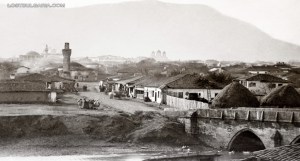 The construction of Lions’ Bridge started in 1888.Until then, on that spot Sofia had a stone bridge called Motley Bridge. 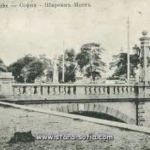 The construction of Eagles’ Bridge started the year after that. The construction of both bridges finished in 1891. The Prošek Brothers Company awarded the construction of the metal railings and eagles to Rudolph Waagner in Vienna. They were installed in memory of the Bulgarian exiles in Diyarbakir during the Ottoman occupation. The bridge was located on the spot, where they were greeted after returning from captivity in 1878. Soon after that, Waagner developed the Bulgarian church in Istanbul – Sveti Stefan, known as the Iron Church. 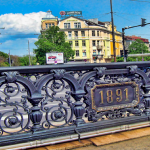 The work of the Prošek brothers has left deep traces in the history of Bulgaria to this day. Without them, it is hard to imagine how Sofia would look like.