Sofia, Forever Associated with the name of the Prošek Brothers

There is hardly anyone who has lived or been a guest of Sofia and has not seen and felt respect for the symbols of the capital that have been built by the brothers Georgi and Bohdan Prošek!

Lions’ Bridge is an important and busy intersection and bridge in the central part of Sofia. Motley Bridge was located on this spot before it was constructed in 1889. The bridge crosses the Vladayska River and is situated at the intersection of Maria Luiza Blvd. and Slivnitsa Blvd., connecting the Central Railway Station and Central Bus Station with the city centre. The bridge is one of the landmarks of the capital city and is also a symbol of Sofia‘s Serdica District. Right next to the bridge and the intersection is the location of the square that bears the same name – Lions’ Bridge. 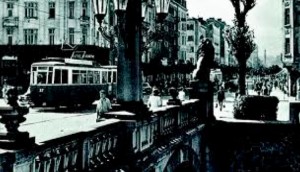 During the Ottoman occupation, the river was called Kanli Dere, i.e. the Bloody River, with the legend linking that name to the bodies of the Bulgarians killed during the defence of Sredets that were thrown into this part of the river. The history of Motley Bridge is that it was built by the rich Turk living in Sofia called Halil Sali Efendi. The bridge is called that way as it was painted with yellow and red stripes.

Until the Liberation, the spot where Lions’ Bridge is now located was used for executions of criminals. There was a law in the Ottoman Empire stating that if the criminal is not from the same town, he should be hanged in front of the gate, where he entered it. Similarly, Levski was hanged near the Eastern Gate. The locals were executed on the squares. The participants in the April Uprising, Stoycho Rashkov and Todor Maleev were hanged next to Lions’ Bridge. The youngest of the Four Booksellers of Sofia, Georgi Stoitsev, a chanter in Sveti Kral church (contemporary Sveta Nedelya), was also executed here. 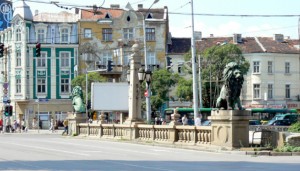 Right after the Liberation, Hristo G. Danov proposed to erect a monument to the bookseller and revolutionaries hanged in that place. The idea rapidly gained popularity among intellectuals, which led to the development of a massive project for a memorial. Its implementation began in 1889 – 1891 by the Prošek Brothers Company, in accordance with the design of architect Kolar and their cousin Václav Prošek and cost at that time 260 000 golden leva. A bridge was built, where the lions symbolize the four Bulgarian that were hanged by the Turks. The bridge is 26 m long and 18.1 m wide. It is decorated with four bronze sculptures of lions, where its name is derived from. They were made by the Viennese company Waagner & Biro.

As of 2012, Lions’ Bridge Square is served by the Sofia Metro.

Eagles’ Bridge is an important and busy intersection and bridge in the centre of the city of Sofia. The bridge is built over the Perlovska River. Its name comes from the bronze statues of the four eagles, which are its symbolic patrons and guardians. It is located next to the National Stadium Vasil Levski and Borisova Gradina Park. After entering Sofia from the east on Tsarigradsko Shose, the bridge is the first intersection through which one enters the very centre of the city. 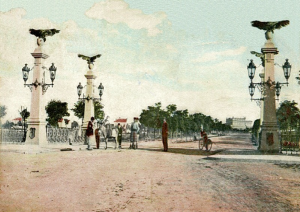 Another emblematic work of the brothers Georgi / Jiri / and Bohdan / Theodore / Prošek is the construction of Eagles’ Bridge. The bridge is built in 1891, two years after Lions’ Bridge. During that time, the Chief Architect of Sofia was Adolf Kolar. He and arch. Václav Prošek, cousin of the Prošek brothers, designed and constructed the two bridges. Eagles’ Bridge is constructed as a symbol of liberty, as here for the first time the prisoners from Diyarbakir that raised an uprising against the yoke were greeted. 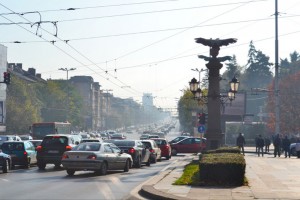 The metal elements were developed, cast and delivered by the Viennese company Rudolph Philip Waagner

& Biro (1891). The exquisite products of this company decorate other architectural monuments of Sofia as well – the Monument to Vasil Levski and the fence of the City Garden, the Lions’ Bridge and the Prince’s Palace (today the National Art Gallery).

The back side of the 20 leva bill from 1999 features depicts the building of the National Assembly and fragments from Eagles’ Bridge and Lions’ Bridge – monuments of architecture. 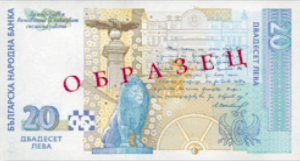 The Monument to Vasil Levski is located in the centre of the city of Sofia, Bulgaria. It is situated in the middle of a busy intersection, regulated with a roundabout, at the crossing Vasil Levski Boulevard, Yanko Sakazov Boulevard and Moskovska Street. The altitude there is 548,747 m above sea level. 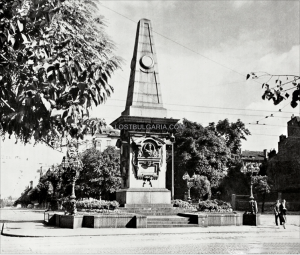 It was one of the first monuments that have been erected in the new capital city after the Liberation. The monument is situated near the presumed site, where the Bulgarian revolutionary Vasil Levski was hanged on 18 February 1873. The plans for its construction date back to Liberation in 1878, but due to poor organization and a lack of funding, it was officially opened on 22 October 1895.

It was also the idea of the Czech brothers Prošek to erect the monument to the Apostle of Freedom Vasil Levski, with whom they carried out revolutionary activity for the liberation of Bulgaria. 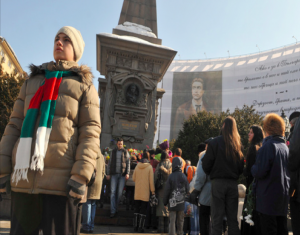 The monument consists of a column that is 13 m high, built out of grey granite, according to the design of the Czech architect Antonín Kolář. The main part of the column is the work of the Italian Abramo Peruchelli and the bronze bas-relief portrait is by Viennese company Waagner & Biro.

Among the symbols of Sofia are the brewery of the Prošek brothers and the Deep Cellar pub, situated adjacent to Eagles’ Bridge. The residents of Sofia owe the famous Prošek Beer to the Czech brothers, the two iconic bridges in the capital – Lions’ Bridge and Eagles’ Bridge, as well as the city’s Master Plan from the end of the 19th century. 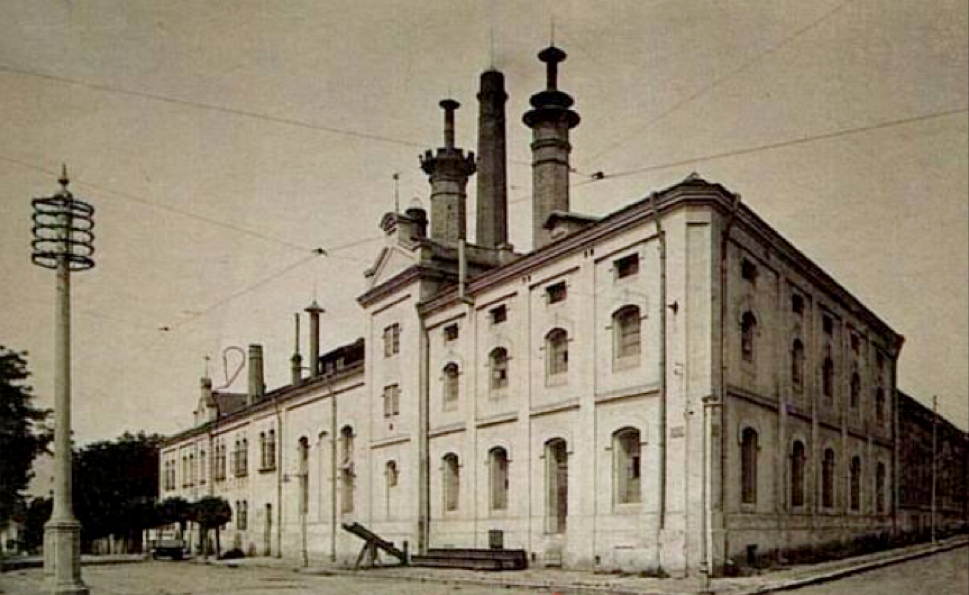 The brewery of the Prošek brothers around 1884

Jiří Prošek (1847-1905), engineer and entrepreneur, arrived in Bulgaria before the Liberation. He bought a place outside of Sofia near the old Turkish cemetery and in 1881 he started the construction of his famous brewery on 22, San Stefano Str. In the meantime, the two brothers founded the family company, Brothers Georgi and Bohdan Prošek – the Bulgarian translation of the Czech names Jiří and Theodore, with its main business activity being production and sale of beer and ice, printing and construction enterprises.

The construction of the factory went on until 1884. Brickwork masters were hired, as well as excavation specialists for the cellar, where the beer was to mature. When the factory was ready, adjacent to it, at the corner of the boulevard known as the “Tsar” and San Stefano Street, the brothers built their own pub with 50 tables and 400 chairs – the prototype of the famous Deep Cellar.

With its opening, the factory became a supplier of beer to the court. It is also the first electrified building in Sofia with its own generator. In the period between 1927 and 1947 Prošek‘s factory is among the breweries with the largest volume of production, but in 1947 it is nationalized and renamed to Vitosha Brewery, later becoming part of Sofia Beer Factory. In 1996, Sofia Beer was renamed to Ariana Brewery. In 1997 controlling interest of shares of Ariana Brewery were acquired but Heineken and Coca Cola Hellenic Bottling Company.

We have to mention another two remarkable people from the Prošek family – Václav and Joseph. Both of them came to Bulgaria after being invited by their cousins Georgi and Bohdan. Joseph Prošek participated in the preparation of the Master Plan of Sofia, known as the Prošek Plan, and after it was approved by the prince, it was called Battenberg Plan. Two of Sofia’s bridges – Lions’ Bridge, 1889 (known as Motley Bridge until then) and Eagles’ Bridge, built in 1891, are constructed using Václav Prošek’s design.

Today, the multifunctional complex San Stefano Plaza is being erected at the site of Prošek’s Beer Factory. It features four-storey car parks at the impressing depth of 18.50 metres and a width of 6.5 dca. In terms of this indicator, this is a record in construction in Bulgaria and logically it is one of the most expensive excavations. The deepest and safest construction excavation is carried out using revolutionary strengthening technology by Bauer Bulgaria Ltd., which is new in the country. The technology allows the injection of anchors in a load capacity of up to 200 tons per anchor. 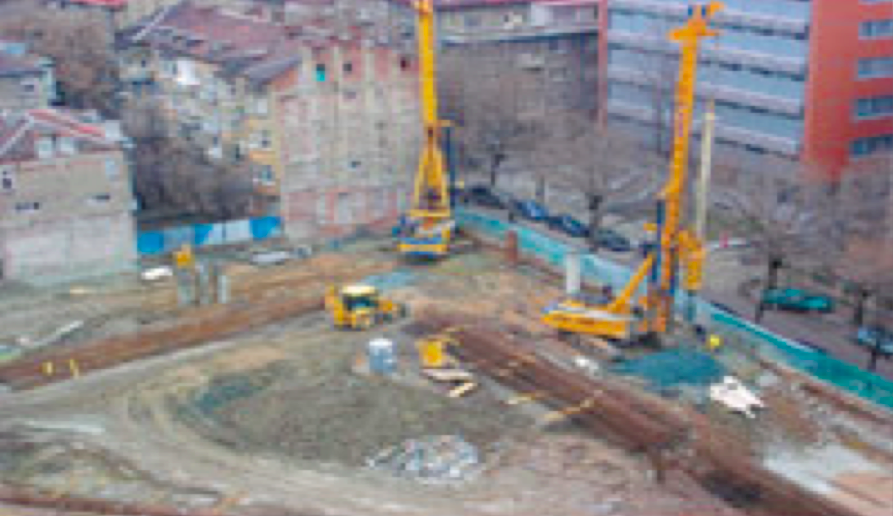 The multifunctional building San Stefano Plaza is reinforced using a new system, which allows the safe execution of an excavation with a depth of 18.50 metres and a width of 6.5 dca. – the deepest excavation made in Bulgaria until now.

The most attractive space in the building will the atrium in the mall with a height of 20 metres, lavishly glazed, with a lot of greenery, a water area, shops and cafés. Elegant offices and luxury apartments are envisaged, the design of which is a fine challenge for arch. Filip Zahariev, arch. Stefan Dobrev and arch. Iliyan Nikolov. 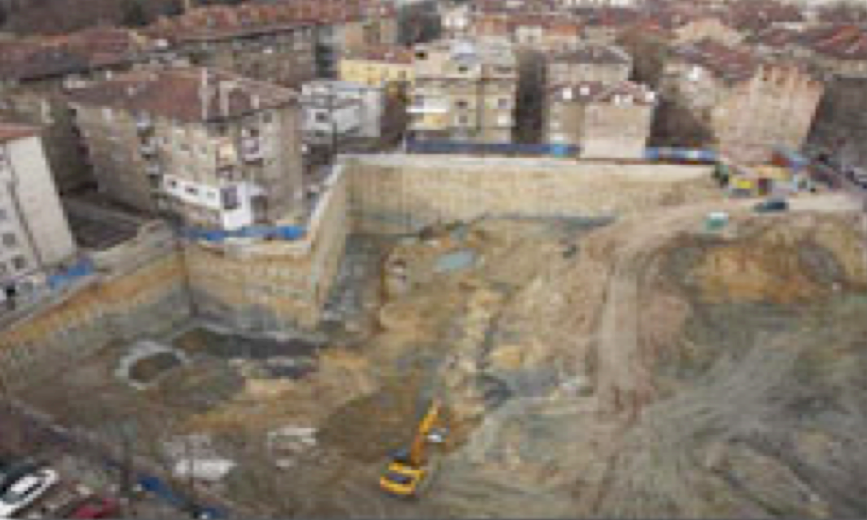 The northeastern part of the façade will include a reproduction of the façade of the former Prošek Factory, which will remind of the glory of the Czech brewers, the two brothers Georgi and Bohdan Prošek!