A Documentary by the Czech Television About the Proshek Brothers (2012)

“Remarkable Traces” is the documentary cycle by the Czech director Radovan Lipus and David Vavra (2012, Czech Republic), episode 1, dedicated to the life and deeds of the Proshek family

The documentary “Remarkable Traces” is part of a series, telling the story of Czech architects and the fate of their buildings abroad. After the shooting of episodes in Bosnia and Herzegovina, Slovenia and Japan, the Czech television’s crew sets off to Bulgaria, in order to create a four-episode cycle about the Proshek brothers, Adolf Kolarj, Libor Bayer, the Shkorpil brothers, Y. Schnitter and others. 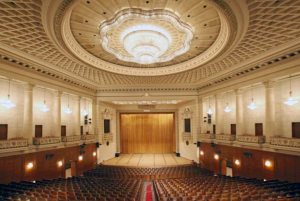 The wave of Czech architects, engineers and entrepreneurs that come in Bulgaria a little before and after the Liberation, predetermines the countenance of tsarist Sofia. Before the first group of Bulgarian architects come with degrees from the polytechnics in Munich, Prague and Vienna, it is Czechs that stay behind some of the most emblematic buildings and city planning decisions in the Capital: The Military Club (A. Kolarj), Lavov Bridge and Orlov Bridge, the brewery “Proshek Lager”, the Port in Varna (The Proshek Brothers). Yosef Schnitter works in Plovdiv, and the Shkorpil brothers – in Varna and Northeast Bulgaria.

The episodes made here that are part of the series “Remarkable Traces” are: “The Proshek Family”, “Adolf Vaclav Kolarj”,  “Yosef Vaclav Schnitter”, and “From Shipka to Varna”. The films are made with the kind cooperation of the Czech cultural centre in Bulgaria.